A follow-up to our conversation with Baruch alumni who, as public school principals, are leading their schools' transitions to distance learning. Log on to hear what issues they are grappling with and what they envision for the future of K-12 education. 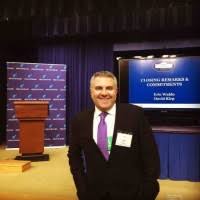 Mr. Saliani holds two Master's degrees, receiving an MA from New York University in Latin American & Caribbean Studies (History Concentration) and an MS in Education Administration and Supervision from Baruch College. He completed his undergraduate degree at SUNY-New Paltz with a major in History and minor in African-American Studies.