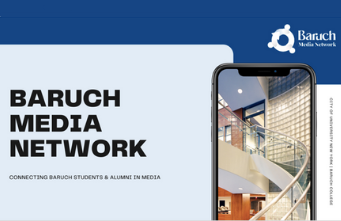 With approximately 160,000 alumni worldwide, Baruch College boasts tens of thousands of alumni across a wide range of industries, including finance, accounting…and media!

Many Baruch students who study marketing, information systems, corporate communications, and other subjects across all three schools pursue careers in film, television, and digital media at traditional media companies such as ViacomCBS, Warner Media, HBO, and NBC Universal, and newer ventures such as Facebook, Pinterest, and TikTok.

In Fall 2020, two Baruch alumni, Sabrina Mohan and Wendy Xie, met via ZOOM with Janet Rossbach, Director of Alumni Relations and Volunteer Engagement, to explore the possibility of creating a professional network to support alumni and students across the media landscape. They both felt that the large world of media and entertainment deserved its own alumni network and students interested in the field would benefit from more targeted networking and coaching with alumni across media industries.

Sabrina and Wendy are pleased to announce the launch of the Baruch Media Network, which you can find virtually on LinkedIn. To date, Sabrina and Wendy have more than 120 alumni signed up as members of this private LinkedIn group. They look forward to the group becoming an active venue for sharing media industry news, posting job openings, and encouraging active networking among students and alumni.

According to Sabrina and Wendy, the mission of the Baruch Media Network is “to empower Baruch students and alumni interested in rising to leadership in the media and entertainment industry through providing career advancement workshops, job search referrals and a mentorship program.” They look forward to building a more robust channel for sharing career opportunities between media companies where alumni work and the undergraduate and graduate career offices across campus. Sabrina and Wendy look forward to building a Media Training Program where Baruch students would shadow alumni at their companies and experience the different companies’ cultures. The Alumni Office will partner with the Baruch Media Network to coordinate a mentoring program in the months to come to support more targeted coaching for students interested in media careers.

Sabrina and Wendy also want to champion diversity across media industries and build a community for media creative professionals.

"Starting this network is very personal to me and something I have wanted to do for a long time," said Sabrina. "I want students and alumni to realize that they are supported in their ventures and that media and creative careers are viable options even though it may seem untraditional to their friends and family. Wendy and I hope to create a media landscape at Baruch and beyond that is diverse and experienced through Baruch Media Network.”

According to Wendy, "Producing this network for Baruch means the start of real representation for media creatives like myself. By founding the new organization with Sabrina, we are excited to utilize this new space to inspire hope and increase opportunities for our members in Baruch Media Network without the need to compromise their vision.”

The Baruch Media Network has ambitious goals and, based on Sabrina and Wendy’s energy and enthusiasm, we look forward to it becoming an extremely valuable resource to Baruch alumni and students in media. It will join the ranks of other Baruch alumni industry networks, including Real Estate, Law, Insurance, Investor Relations, International Business and the Arts. To learn more about these networks, as well as our affinity groups – Baruch LGBTQ Alumni and Allies, Robert C. Weaver Society Black Alumni Network, SOMOS LatinX, and the Asian Heritage Alumni Network – visit here..

Please contact Sabrina and Wendy at baruchmedianetwork@gmail.com with any questions and stay tuned for details for their first event with Politico in April 2021!